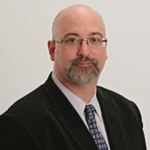 The Highland Title + Escrow team enjoys taking the time to share about our title professionals because they are the ones who work hard every day to ensure a favorable settlement experience for everyone involved. This time around, we are shining our employee spotlight on Richard Beard. Richard is an Attorney and Settlement Agent covering Stafford, Virginia, to Fredericksburg, Virginia.

Richard attended New College, part of Oxford University in England, where he finished his first degree. Then, he attended George Mason University, where he completed a second degree in Government and Politics with a minor in public law. Richard then attended the University of Miami School of Law and returned to England to study at the University of Central London to obtain his law degree. A unique fact about Richard is that he didn’t decide to become an attorney until after spending eight years in The United States Navy as a Nuclear Engineer.

Richard was introduced to title insurance claims and their litigation in his first position at an insurance defense firm in Coral Gables, Florida. His focus turned to real estate law, and he worked with a few title companies before settling on a home with Highland Title and Escrow.

As an Attorney and Settlement Agent, Richard spends his day talking with clients, agents and others in the business, answering their questions and solving their issues. He feels it’s vital that people know what is happening throughout the most significant purchase in their lives. He enjoys Highland Title + Escrow’s family culture and environment, and he, as well as the other team members, focus on helping people not only complete their real estate transactions but also walk away with a thorough understanding of the process.

When not working with Highland Title + Escrow’s outstanding team of title professionals, Richard enjoys spending time with his family and children.